During the Covid-19 "Safer at Home" period,Glendale Noon Concerts will bring our programsto you via streaming on Facebook and Youtube:The FEBRUARY 3, 2021 program can be viewed at this linkbeginning at 12:10 pm PDT. (VIDEO will be available ongoing)

Sonata for violin and piano

Sonata for violin and piano

Internationally acclaimed violinist/violist Ken Aiso has performed worldwide as soloist, chamber and orchestral musician. Ken graduated form the Royal Academy of Music in London studying with Erich Gruenberg. His other teachers include Eduard Schmieder and Chikashi Tanaka. Equally at home with modern and period instruments, Ken has appeared as principal violin with the Orchestra of the Age of Enlightenment, the London Philharmonic, the Hallé and the Scottish Chamber Orchestras.

He has been invited to renowned music festivals in UK, France, Sweden, Switzerland, India, Georgia, Bolivia and Kazakhstan, and has taught at Montecito Summer Music Festival since 2008. Ken is a laureate of Long-Thibaud International Competition in Paris and International Music Competition of Japan, and was elected Associate of Royal Academy of Music in London. He received Shimousa Kan-ichi Music Award in his native Japan in 2018. Since moving to Los Angeles in 2015, Ken has been serving as faculty at Loyola Marymount and La Sierra Universities, and performs with Los Angeles Chamber Orchestra.

Valeria Morgovskaya, pianist, graduated from the Kiev State Conservatory. Since her immigration to the US in 1990, Ms Morgovskaya has been in high demand as accompanist for singers and all orchestral instrumentalists. She has been an official accompanist to festivals and courses such as Piatigorsky Cello Seminar and Beverley Hills Music Festival, and has performed throughout the US, Germany and Japan, as well as on numerous radio broadcast. She has provided accompaniment for many national and international competitions, and was an official accompanist at Schoenfeld International String Competition in Hong Kong (2013) and Harbin (2014). Ms. Morgovskaya is currently staff accompanist at Loyola Marymount University and UCLA, and is often engaged in that capacity at USC, Cal State Long Beach, Colburn School, Montecito International Music Festival, Academy of the West and Idyllwild School of Music and the Arts. 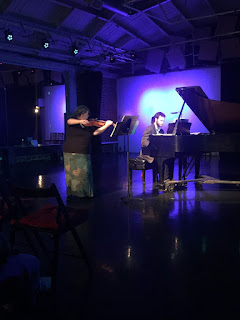 During the Covid-19 "Safer at Home" period,Glendale Noon Concerts will bring our programsto you via streaming on Facebook and Youtube:The JANUARY 20, 2021 program can be viewed at this linkbeginning at 12:10 pm PDT. (VIDEO will be available ongoing)

The concert can also be viewed on the Glendale City Church Youtube Channel:

KIRSTIN FIFE Violin Sonata for Violin and Piano, No.1 (2020, premiere)

There are many wonderful violinists on the world's stages today, but not many of them compose and perform their own original compositions along with those of the master composers of centuries past.  Kirstin Fife has distinguished herself as one of these more rare musicians, consumate performer and composer.

Many of her concerts are given in an intimate setting, such as private homes and small theaters. Also, she performs in regular concert series, such as The Glendale Noon Concerts, the Pasadena Presbyterian noon concerts, the Sunday musicale series at the Newport Beach Library,  and The Sunspace Thursday night concert series.  Recently, Kirstin has been promoting and performing her performance piece, "The Major Arcana", for violin and piano, which includes a slide show to enhance the presentation.

In addition, to "The Major Arcana", Kirstin has been performing her pieces based on the art work of Salvador Dali, with the Dali Ensemble of Los Angeles.

"Czechmate" and "Pieces of My Heart" are two CD's that she released in 1996 and 2011 respectively.  In between, were hundreds of recordings as a studio musician for movies, television, and records including "Mission Impossible",  "Jag" Star Trek:The Next Generation", "Michael Jackson"  and many others too numerous to mention.  On camera, she has appeared on "American Idol", "Tonight Show", and  "The Voice", and others.   Also, she has performed for all of the major awards shows, including the Academy Awards, The Emmy Awards, the Country Music Awards, and the Grammy Awards (with Prince and Bruno Mars).

Kirstin loves to perform for charitable causes, these have included "Alzheimer's Foundation" "The Red Shirt Project" and "Hope Gardens.  She welcomes the opportunity to do much more of this kind of work.

Believing that music for weddings should be of the highest caliber, for that most special day, Kirstin makes special arrangements, and performs for many ceremonies around Southern California.  For more information, please go to FifeDreams.com.

Jacqueline Suzuki, violin, is a longtime member of the Long Beach and Santa Barbara Symphonies. A native of San Francisco, she began her earliest chamber music studies on scholarship at the San Francisco Conservatory. She has performance degrees from the Mannes College of Music (BM), where she studied with William Kroll, and the California Institute of the Arts (MFA). As a Los Angeles freelancer, she has performed with many ensembles and in many genres, from rock, jazz, Latin and Arabic, to playing in the pit for the Bolshoi Ballet and onstage with the Three Tenors. She has recorded with diverse artists: Snoop Dogg, Neil Sedaka, Leonard Cohen, Whitney Houston, Bocelli, Lalo Schifrin, McCoy Tyner, Placido Domingo and many others, and appears on recordings by the Long Beach, Santa Barbara and Pacific Symphonies. She has spent summers at the Peter Britt, Oregon Coast, Carmel Bach and Cabrillo Festivals and has performed in a string quartet “in residence” on a raft trip down the Green River in Utah. Tours have taken her many times to Japan, Taiwan, Mexico, Canada, Europe, the Middle East and throughout the US.

KIRSTIN FIFE Sonata For Violin and Piano No.1

Movement 1 was composed largely during the wildfires in Los Angeles in the Winter of 2017. I was evacuated, and though very distracted, tried to compose. The only thing I could think of were very large accented skips of intervals, like the breaking of branches and repeated minor 7th intervals, which I cobbled into the first movement of the sonata.

Movement 2 was composed on a ukelele during the previous winter. The chord progression was discovered by me, as I was fooling around on a blue plastic uke that I bought on a whim. I thought it reminded me of a chord progression, that of one of my idols, Sergei Prokofiev. The steady eighth notes are an Alberti bass pattern, used frequently in pop songs or a picking pattern for a uke.

Movement 3 was inspired as a frenetic/manic boogie woogie. It begins with solemn sustained chords in the introduction and then continues into this tribute to Americana. I imagined kids dancing to a Lindy or other popular song, except with lots of parallel motion as the harmonic foundation. In the middle, there is a nod to more contemporary jazz rhythms.

JOHANNES BRAHMS Sonata for Violin and Piano No.3 in D minor, Op.108