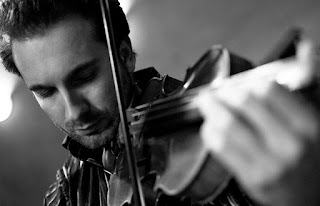 Violinist Dr. Dimitry Olevsky holds a Doctorate of Musical Arts from UC Santa Barbara under the tutelage of the renowned violinist Yuval Yaron. During his studies, Dimitry was the first violinist of the Young Artists String Quartet in residence, concertmaster of the UCSB Symphony, and led violin sectionals with the orchestra, with which he also performed as the concerto competition winner.

The Master of Music degree was awarded from the prestigious Manhattan School of Music in New York under the guidance of professor Grigory Kalinovsky. It was during his studies at MSM that Dimitry pursued his interests in the field of Sport Psychology and focused his research on triggers for performance anxiety, stage fright as well as methods to establish

better control over the physical and psychological symptoms known to negatively impact performance. Upon completion of his DMA, Dr. Olevsky published a dissertation in the field of Sports Psychology: “The Study of Success in Music: Applying Methods Developed by Sports Psychology towards Achieving Peak Performance”.

By incorporating his studies in lessons, Dimitry’s methods successfully help develop and increase control of muscular and mental functions, accuracy, precision, discipline, mental awareness and overall coordination in violin performance. As feedback to his approach, students win title positions in the Colburn Chamber and Los Angeles Youth Orchestras, Idyllwild Music Festival, Interlochen Music Festival, Palisades High School Symphony, Grand Prizes in the International Music Competition of Young Performers ‘Colibri’, Concerto Competitions by the Committee of the Los Angeles Philharmonic and Idyllwild School Auditions. His students also have had the privilege in performing at the Disney Hall and participate in orchestral tours in Prague, Vienna and Italy.

Currently, Dimitry maintains a private studio, a faculty position with the Beverly Hills International Music Festival and the college-preparatory Windward School. Working with students is an opportunity to share knowledge and experience while incorporating principles of the continuously developing science of Sports Psychology with further emphasis on social, mental, artistic performance, as well as on general psychological benefits and human enrichment.