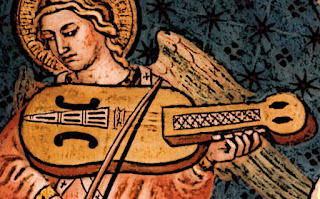 Selections from
The Cantigas de Santa María
These cantigas are a collection of 427 songs dedicated to the Virgin Mary. As legend goes, all of these tunes were written by “the Wise” King Alfonso X of the Kingdom of Castile in Spain towards the end of the 13th century. These songs recount the many miracles of the Virgin with every tenth song being a Cantiga de Loor or Song of Praise. This Marian manuscript has been the subject of debate for nearly a century due to its unusual notation. Scholars today are still trying to figure out how to most accurately perform these songs.

Roksana Zeinapur is a Russian-American lyric soprano, actress and improviser. Her improvised opera works have been performed at The Blue Whale, La Bibliotheque Fantastique, Highways Performance Space, The Electric Lodge, and Mimoda Studio in Los Angeles. Highlights of her work as a lyric soprano include the roles of Mimi in La Boheme, Fiordiligi in Cosi Fan Tutte, Countess Almaviva in The Marriage of Figaro, Pamina and The First Lady in Die Zauberflote and Blanche in Dialogues des Carmelites.  Roksana has performed with Long Beach Opera, Repertory Opera, Classical Revolution, Symbiosis Chamber Orchestra, and OperaWorks, among others. Upcoming engagements include Fiordiligi in Cosi Fan Tutte with Vineyard Touring Opera. This summer she will be joining Teatro Nuovo at Bel Canto at Caramoor as an apprentice artist.
Her recent performances on the theater stage include Food for Thought with The Walking Theater Group and Kharmful Charms of Daniil Kharms with Artel.

She has appeared in films Ghost Watch, winner of the Audience Award at the Inland Empire 48 hour Film Project, Sunset Empire, Oscar's Truth and Recovery.
Roksana holds an MFA in Collaborative Piano from California Institute of the Arts and a BA in Piano Performance from Pepperdine University. Born and raised on the Baltic Coast in Riga, Latvia, she now makes her home in Los Angeles.

Mishkar Núñez-Fredell  was born in Santiago de los Caballeros, Dominican Republic; he holds both Doctorate and Masters degrees from the University of Southern California and a Bachelors degree from Luther College. In 2012 he was presented with the Cultural Personality of the Year award from the Ministry of Culture of the Dominican Republic. Dr. Núñez-Fredell's specialty is in Baroque Violin and early musical notation. His latest venture is Delirium Musicum, a 10-piece string ensemble that breathes new life into contemporary and old music alike.
Posted by Jacqueline Suzuki at 7:44 AM 0 comments 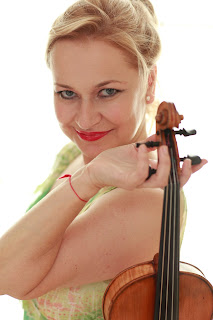