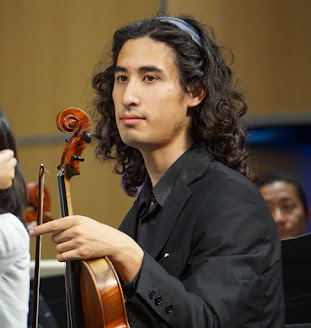 Violinist ALEXANDER KNECHTDuring the Covid-19 "Safer at Home" period,
Glendale Noon Concerts will bring our programs
to you via streaming on Facebook Live and Youtube:
The SEPTEMBER 2, 2020 program can be viewed at this link
beginning at 12:10 pm PDT:

A list of upcoming concerts will be posted soon.
http://glendalenoonconcerts.blogspot.com
Streaming on Wednesday SEPTEMBER 16, 2020 at 12:10-12:40 pm PDT:
ADRIANA ZOPPO - viola d'amore
PLEASE HELP THESE CONCERTS TO CONTINUE WITH A DONATION:
https://adventistgiving.org/#/org/ANPPGL/envelope/start
Or by mailing it to 610 E California Ave, Glendale, CA 91206 to the Friends of Music.
The Glendale Noon Concerts series is presented by Glendale City Church every first & third Wednesday at 12:10-12:40 pm. www.glendalecitychurch.org
Concert schedule: www.glendalenoonconcerts.blogspot.com
Glendale City Church also presents the Second Saturday Concert Series,
http://glendalecitychurch.org/index.php/ministries/second-saturday-concert-series.html
and sponsors the Caesura Youth Orchestra http://www.mycyo.org
Much appreciation to the Hennings-Fischer Foundation for their mission to support art & education and their generous grant to GNC.
RELAX DURING YOUR LUNCH HOUR WITH LIVE MUSIC

In 2018, he became a member of the viola section of the Long Beach Symphony Orchestra. During the past year, he has served as a Teaching Artist for the Caesura Youth Orchestra at Columbus Elementary School in Glendale. This summer he also represented CYO as a Teaching Artist in the YOLA At Home Virtual Seminario in collaboration with El Sistema USA. Earlier this year he was invited as a guest violin sectional coach to Glendale High School. Last year he founded a free violin class outreach program at the Los Angeles Chinese Seventh-Day Adventist Church. He has been a mentor teaching strings in the CKC-Music community engagement program in San Bernardino since its founding in 2008, continuing to the present day through Zoom.

Last month he performed in an online celebration of the violin caprices of Sophie-Carmen Eckhardt-Grammaté, as part of a celebration of Canada Day hosted by Scott St. John of the Colburn School. He remains an active teacher and performer online, and is grateful for high-speed internet!

In past summers he has been a fellow at the Aspen Music Festival, the Music Academy of the West, and the Gonggeng Music Festival in Zhejiang Province, China. He comes from a musical family of Chinese, Korean and Caucasian ancestry including three siblings, all of whom play and teach string instruments.

Johann Sebastian Bach's Six Violin Sonatas and Partitas date from his years under the patronage of Prince Leopold in Cöthen. Although only a minority of his oeuvre throughout his life did not consist of explicitly sacred music, the majority of his instrumental works dates from this period. All six of the sonatas are composed around patterns of Baroque dance music that were established in his day, but only this Partita preserves the antiquated practice of 'doubling' movements, or performing them with chords written out as separate notes and rhythms expanded into faster but more regular patterns.

Although the Second Partita in D minor also contains an Allemande, the one beginning the B minor Partita is distinctive in its dotted rhythmic pattern throughout resembling a French overture in contrast to all the other first movements among the Six Sonatas and Partitas. The thematic and harmonic resemblance between the movements and their respective doubles is noteworthy. For some listeners hearing this Partita for the first time, the first two movements in order with their doubles can even sound like one long movement progressing through faster and faster rhythmic patterns. The Sarabande contrasts to the other movements in that it never reaches a cadence in the mediant key of D major, breaking the harmonic parallel between all the other movements. The Bourree is the most intensively polyphonic movement in the Partita, often maintaining three and even four voices through the use of chords, even though none the Partitas contain the Fugue movements as do the three Sonatas. As a whole, this Partita is noteworthy in its length and stamina required in performance, but also in its rewards at all levels in repeated listening.

Eugene Ysaÿe (1858-1931) was one of the world's preeminent violinists in his lifetime. A personal friend and compatriot of Queen Elisabeth of Belgium, he was a benefactor of her generous patronage of the arts. In 1937, she established the Ysaÿe competition in his memory, which remains to this day under her name. In 1923, he composed his own six sonatas for solo violin, with obvious inspiration from J.S. Bach. Since their writing, they have become an established part of the repertoire to the extent that, in metaphorical terms, if Bach's Six Sonatas and Partitas are the Old Testament, violinists today would consider Ysaÿe's sonatas the New Testament.

The intricacies of left-hand technique to which the performer is called are incongruous considering Ysaÿe's physical size, at six feet tall. Not only are large stretches called for, but equally difficult are the contractions and contortions of the hand. The fingers always feel too thick, when they do not feel too small! Nevertheless, one develops a feeling for the writing after spending time with it, and eventually the feeling emerges that the sonatas show one how to play them, with Ysaÿe himself teaching the performer his proprietary secrets.

The fifth sonata stands out in its economy of thematic material compared to the other five. The first movement, "L'Aurore," is simply named after a sunrise. It begins the most quietly out of all six sonatas, with a perfect fifth on open strings, then a major sixth, then a major third. The rest of the first movement, through all of its variation, ornamentation and expansion of register, is constructed around this cell of thematic material. The second and concluding movement, "Danse Rustique," is constructed around a one-measure opening theme, first in a lively 5/4 time, but later in other rhythmic treatments. Beneath the surface harmonic language of whole-tone scales, parallel fifths and harmonic planing, there is a clear tonal and formal structure in which Bach would find himself at home.