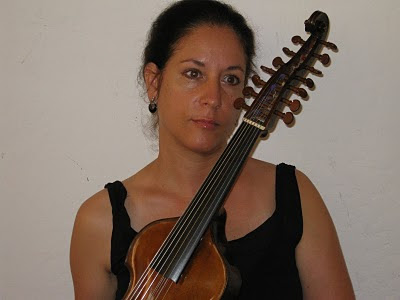 FREE ADMISSION GLENDALE NOON CONCERTS
Every FIRST & THIRD WEDNESDAY at 12:10-12:40 pm
The October 5th concert will be dedicated
to the memory of Alan Deane, musician
and devoted friend of the Glendale Noon Concerts.
In his long career, he had been guitarist/vocalist
for the Captain & Tennille, The Grass Roots, Johnny Rivers
and countless television and film projects.
We will remember Alan and his wonderful spirit.
On Wednesday OCTOBER 5, 2011 at 12:10-12:40 pm

A 2010 Beverly Hills Auditions of the Consortium of Southern California Chamber Music Presenters Winner on Viola d’Amore, Los Angeles native ADRIANA ZOPPO performs professionally on violin, viola, baroque violin, baroque viola, and the unusual and rarely heard viola d’amore. She plays with the original instrument ensemble Musica Angelica Baroque Orchestra, and is the baroque violinist for the period ensemble the Los Angeles Baroque Players. A member of the Carmel Bach Festival Orchestra for several years, she has served on the faculty of the Maud Powell Festival as baroque violin performer and teacher and plays currently for the Corona del Mar Baroque Festival and has been recently appointed director of Ergo Musica, a sub-series of the Glendale Noon Concerts specializing in presenting concerts of period instruments. Ms. Zoppo plays frequently for film and television, solo artist recordings, Broadway musicals, live shows encompassing musical styles from classical to jazz and performs regularly in the string sections of symphonies and numerous other ensembles in the Southern California area. Artist website: ergomusica.com

ANTHONY BRAZIER, flautist, was born in Los Angeles where he received his early training at USC’s School of Music, Preparatory Department. He has been heard in numerous chamber music, orchestral and solo performances throughout the So. Calif. area for the last thirty years. Mr. Brazier has also concertized throughout the U.S.A., Mexico, Europe and Taiwan. He is a founding member of the Los Angeles Baroque Players, an early music ensemble that performs on period instruments. He most recently performed J.S. Bach’s Mass in b minor with the Pacific Collegium in Oakland, Calif. on 9/11/2011. Artist website: harpsichordcenter.com/home.html

JEFFREY LAVNER is Co-Chair of the Piano Department at the Colburn School for the Performing Arts. He currently plays harpsichord with the Los Angeles Baroque Players and has performed with Harmonia Baroque and the Nimbus Ensemble, among others. He also teaches jazz piano improvisation at Santa Monica College.

Posted by Jacqueline Suzuki at 1:01 AM