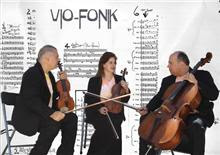 Formed in 1994 by jazz violinist Harry Scorzo,
Vio-fonik is a string trio consisting
of two violins, and cello, and features
Scorzo's writing and improvising.
Harry is joined by Jennifer Walton (violin)
and Alan Mautner (cello), both fine classical
instrumentalists and respected educators.

Vio-fonik's repertoire borrows from the
harmonic and contrapuntal textures of the
mid and late 20th century, and also from
mainstream jazz, Afro-Cuban music, and
popular music of the later 20th century.
They have been said to sound like "Stravinsky
on vacation".

Scorzo's playing can be heard in the recordings
of "Bongo Logic" and "The L.A. Salsa Society",
as well as in the motion picture soundtracks to
"Envy","Rushmore", "Welcome to Collinwood"
and "You Kill Me". His playing is featured in
many television programs and commercials,
including AMC's "Mad Men" and HBO's
upcoming series "Enlightened".

RELAX DURING YOUR LUNCH HOUR WITH LIVE MUSIC
Light lunch to go prepared by ANGELA'S BISTRO
available for $6.
Please place your order before the concert by 12:10 pm;
your order will be delivered by 12:40 pm.

Posted by Jacqueline Suzuki at 4:22 PM