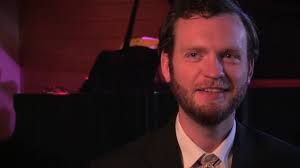 White was born and raised in Tennessee before attending Eastman to study with Thomas Schumacher, and then, the University of Southern California, with Kevin Fitz-Gerald, where he was awarded Outstanding Master’s Graduate of the Thornton School of Music. As a devoted performer of new music, he has worked with notable composers and conductors including Thomas Adès, Donald Crockett, Alan Pierson, Steven Stucky and Jeffrey Milarsky.
COMPOSER BIOS:
(followed by a program note for each piece)

La Rivière Agitée (The Agitated River) was inspired by watching powerful mountain streams turn into rivers in that grow and race over rapids. In the middle of the piece is a moment when the river is temporarily at peace in a beautiful calm stretch but there are underlying currents that once again send it over rocks into a raging downhill torrent.

Mark Robson has been lauded by the Los Angeles Times on numerous occasions, singled out as a pianist with “one of the great techniques” and “an inquiring mind”.  His career has included performance as a keyboard soloist, chamber artist, composer, conductor and vocal coach.  He was a regular member of the music staff of the Los Angeles Opera from 1991 to 2013 as an assistant conductor and has worked as a musical assistant at the Salzburg and Spoleto (Italy) festivals.  Mr. Robson has been on the faculties of USC, Cal State Fullerton, Chapman University and Cal Arts in the capacity of vocal coach and piano teacher.  His music has been performed widely, including orchestral works premiered by the Brentwood-Westwood Symphony Orchestra and the Idyllwild Orchestra.  Soprano Patricia Prunty has recorded his song cycle A Child of Air, which has been performed at the winter Ravinia Festival.  Other compositions include a set of twenty-four preludes for the left hand, a bassoon trio and Dances and Dirges for piano, clarinet and cello.  Mr. Robson's teachers have included Lydia Frumkin, Yvonne Loriod, Alain Motard, John Perry and James Bonn.  Two of his large-scale music projects have been the performance of the complete Beethoven sonatas and multiple performances of Messiaen’s great piano cycle Vingt Regards sur l’Enfant-Jésus.  He can also be heard on occasion in the ensembles the LA Chamber Orchestra and LA Philharmonic.

The etude bLACK/wHITE was composed in 2018 during a period leading up to a program that featured all new etudes in response to the 12 written by Debussy.  When one of the commissions failed to arrive in time (and the concert approached) I wrote this piece with due speed in case I was short-handed.  This however did not come to pass, so its first outing in public is with Brendan White at the keyboard.  Debussy's Octave Etude is vigorous in its outer sections and deeply quiet and sensuous in the middle.  I've gone for a more ongoing driven approach (with a nominal quiet moment) and emphasized the early-to-mid 20th c. preoccupation with opposing the white and black keys as melodic and harmonic material (see Berg, for example).  Sometimes 9ths and 7ths creep in around the octaves too; the whole leads on with motoric energy.

******************
George N. Gianopoulos, known colloquially as Nick, began his musical study at age eighteen upon entering college. Enraptured by his first course, an Introduction to the World of Music, George immersed himself in the studies of classical music; the theory, the repertoire, the performance and the history. He immediately began taking group piano lessons and within a semester advanced to private lessons with Dr. Robert M. Auler. Throughout his tutelage he also undertook the art of pedagogy, developing a private piano studio of twelve students as well as working as a church pianist and organist. After four years of intense study, George gave a senior recital that included performances of works by Mozart, Schumann, Rachmaninoff and Chopin as well as faculty performances of original compositions.
A native of Syracuse, New York and now a resident of Los Angeles, Gianopoulos’ music has been performed throughout Europe and America, including performances in China, Israel, Spain, England and Greece and regular performances in Southern California. George has been commissioned by The Glendale Philharmonic, The Chamber Opera Players of Los Angeles, Tala Rasa, The Symbiosis Ensemble, The Helix Collective and the Malkin-Trybeck Duo, among others. He has been awarded by the American Viola Society, One Ounce Opera, Boston Metro Opera, Aurora Borealis Duo and was the Composer-in-Residence for the Los Angeles based Symbiosis Ensemble and the Alumni-in-Residence (AIR) for the State University of New York at Oswego, where he worked with students and faculty. His music has been performed by members of the Los Angeles Philharmonic, Los Angeles Opera, Pacific Symphony, Los Angeles Master Chorale, along with musicians Dr. Robert Auler, Kathleen Roland-Silverstein, Lynn Vartan, Maksim Velichkin, Michele Fiala (IDRS 2018), Rong-Huey Liu, and Kate Kayaian. Mr. Gianopoulos is the currently the Composer-in-Residence for the Los Angeles based concert series Music @ MiMoDa.

Composition of the Fantasy Nocturne for Solo Piano, Op.17, began in 2009 as a work for solo marimba. As the size and scope of the piece grew, it was no longer suitable for the instrument in which it was intended, so it was completed as a solo piano piece and was subsequently revised in 2012, 2014, with a final revision in 2019 and dedication to pianist Brendan White. Fantasy Nocturne begins with hushed tremolo chords over a harmonically stable ostinato before ushering in an exotic theme that quickly grows to a climax and into a re-iteration of the theme in a more dramatic guise. A lively animato section swoops in with a series of variations and deviations on a chromatic harmonic pattern that gets more exciting with each pass until reaching a peak and crashing back into the introductions’ hushed tremolo. An ornamented twist of the opening tune is quickly whisked away and interrupted by music from the animato section but this too quickly diminishes into a slow and ethereal atmosphere. The opening exotic theme re-enters in a faster, chromatically sinuous state while maintaining an air of elegance and charm and repeats with a dramatic intensity before transforming into a section to be played ecstatically. A short poly-tonal slow passage erupts to a volcanic and virtuosic statement of the theme and culminates in a muted echo in the upper register of the piano with the familiar tremolo from the introduction. While seemingly dying down as the whispers get further away, the music gives one final and thrilling coda based on the harmony of the animato material and concludes with a four-part chorale declaration of the theme, conclusively confirming the nocturnal journey.

The MicroSuite for Piano consists of three vignettes which resemble a miniature sonata in their fast, slow, fast sequence. As the titles suggest however, there is a programmatic implication in their design. Both the first (Idle Hands) and third (Warrior Blue) are rhythmically and tonally aggressive pieces but also contain sections which are in opposition to the emotions suggested by their titles, i.e. introspective digressions from the core attitude of the movement. In contrast, the second piece, Soliloquy, is entirely focused on a moment of meditative reflection.