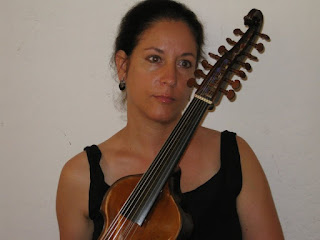 
A native of Los Angeles, Adriana Zoppo performs professionally on violin, viola, baroque violin, baroque viola, and viola d’amore. She is the baroque violinist for the Los Angeles Baroque Players and plays with the original instrument ensemble Musica Angelica Baroque Orchestra. She was a member of the Carmel Bach Festival Orchestra for several years and currently plays for the Corona del Mar Baroque Festival.
Ms. Zoppo plays frequently for film and television, solo artist recordings, Broadway musicals, live shows encompassing musical styles from classical to jazz and performs regularly in the string sections of symphonies and numerous other ensembles in the Southern California area.

Justin Haynes studied viola da gamba at Harvard and the Royal Dutch Conservatory. He has performed with many leading Canadian early music ensembles including Tafelmusik, Opera Atelier, and Les Voix Humaines, and appears regularly as both soloist and continuo player with the Toronto Masque Theatre and the Toronto Consort.

Justin is a founding member of Elixir Baroque Ensemble. His interest in the viola da gamba includes the history and construction of the instrument itself. After making the viol he currently plays on, he was awarded a Shaw traveling fellowship to study instrument making in London and to explore the great Northern European viol collections. In Los Angeles, he plays with Musica Angelica and the Los Angeles Baroque Players. 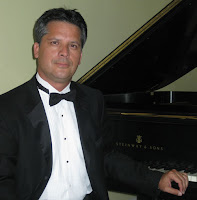 Clarinetist Virginia Figueiredo has performed worldwide as an orchestral and chamber musician. Dr. Figueiredo’s performances have been broadcasted throughout many venues including the Portuguese radio and television, and here in the United States at LACMA’s Sundays Live concert series. She holds degrees from the Lisbon Superior School of Music, CSU, Fullerton, and from the University of California, Los Angeles.
Dr. Figueiredo has been awarded top prizes in clarinet and chamber music competitions in Portugal and in the US. She has premiered clarinet works by Wiliam Kraft, Ken Walicki, and Jenni Brandon, among others. Dr. Figueiredo is on the faculty at CSU, Fullerton, at the Moorpark College, and at the Cerritos College, and a clarinet freelancer in Los Angeles. She performs often with the Pacific Opera Project.

Lorenzo Sánchez Pianist:
Lorenzo’s teachers include Anita N. Olsen, James Bonn, Robert Ward, Constance Keene, and Malcolm Hamilton. In 1992, he completed a doctorate of musical arts degree at USC.
Lorenzo has premiered new concert music for piano, including Robert Guillory's Concertino for Piano and Orchestra. His interest in Polish music led him to appear several times as lecturer and performer at the annual Paderewski Festival in Paso Robles, California.In 2004, Lorenzo accompanied a choral group on a concert tour of Rome, Italy, which included playing for mass at St. Peter’s Basilica. He accompanied a second choral music tour of Italy in January of 2013. He has collaborated in concerts featuring music by African-American composers such as William Grant Still and George Walker. In March of 2005, Lorenzo performed for Dr. Walker and Japanese composer Mitsuru Asaka in concerts taking place in Hawaii.
Looking toward his own heritage, Lorenzo has performed in vocal, chamber, and solo concerts featuring music by Mexican composers. He has edited and helped publish piano music by Mexican composer Domingo Lobato. He has recorded a solo piano CD of Lobato’s four Piano Sonatas available through the internet. He has frequently performed in Mexico with violinist Konstantin Ziumbilov, most recently in Guadalajara’s historic Teatro Degollado.He is a founding member of the Rolón Piano Trio, which is based in Southern California.

Posted by Jacqueline Suzuki at 11:03 AM 4 comments